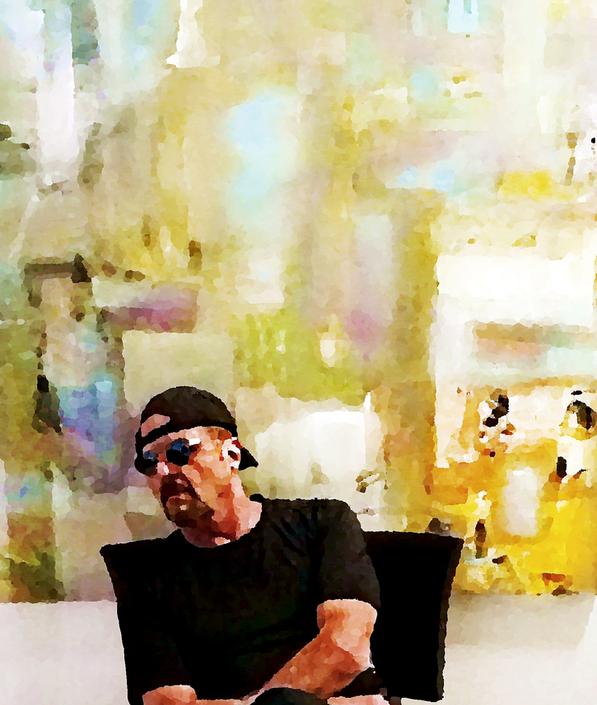 Abstract expressionistic explosions of color which, because of their vibrancy, captures the viewer’s attention silently through a transferred inner harmony, balancing rough edges into calm images of peace. While at other times, johnny's paintings may be  better described as inventive, in a linear sense, portraying images within dreams that wake social senses and the spiritual consciousness asking dark questions many ponder but few welcome the time required to journey beyond the  MASK which they hide behind!

Acrylics’, pastels, metallic powders, venetian plasters, inks and arduous hand rubbed works on canvas / panels comprise a collection of unique and individually specific works, many unseen.  Not an artist who creates  series exhibitions, his paintings more times than not are as personal as the stories, poems or prose he may have written regarding the reason for a certain creation and  inspiration behind the work itself.

A writer as well as artist Johnny is the product of the south having been raised in the ever changing transient lifestyle of a coastal resort. A point where he discovered, within his heritage and the world's dramatic social / cultural shifts during the late 60's and early 70’s an ambitious hunger and overwhelming curiosity to touch, see and become a participant in  the unlimited possibilities offered to those who wish and seek the experience. A passage into the reality of  this worlds risks through challenges, wisdom due to accepting failure, tragic sadness in what was once perfect love. A life journey which when hearing it initially makes one a bit skeptical, questioning its validity as it is hard to imagine that experiences such as these may have crossed one man’s lifetime.

This is the fodder required to step out of and into zones exposing one's personal inner self, which many of his paintings do, very openly.  An ability to see and hear the tragic, beautiful, confused, accomplished, exciting journey in a life free of inhibitions allowing others the opportunity to experience and become, through his works, a part also of its future.

Middle aged, he’d say, johnny has been featured in a few Front Range Colorado galleries and has some large works in a luxury south Texas resort,  however over the years his paintings have mostly been seen by friends, enthusiastic new artist he encounters on the streets of San Antonio and Austin as well as a small number of acquaintances he may befriend in local cafes during dinner each evening with his wife.